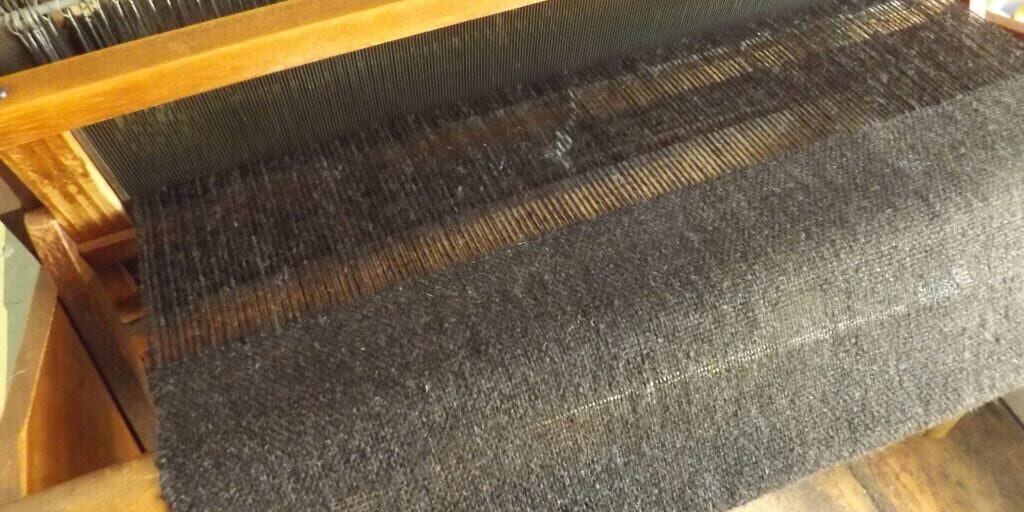 This is the second part of the weaving and spinning Project. (Part One is here). It’s time for the weaving. 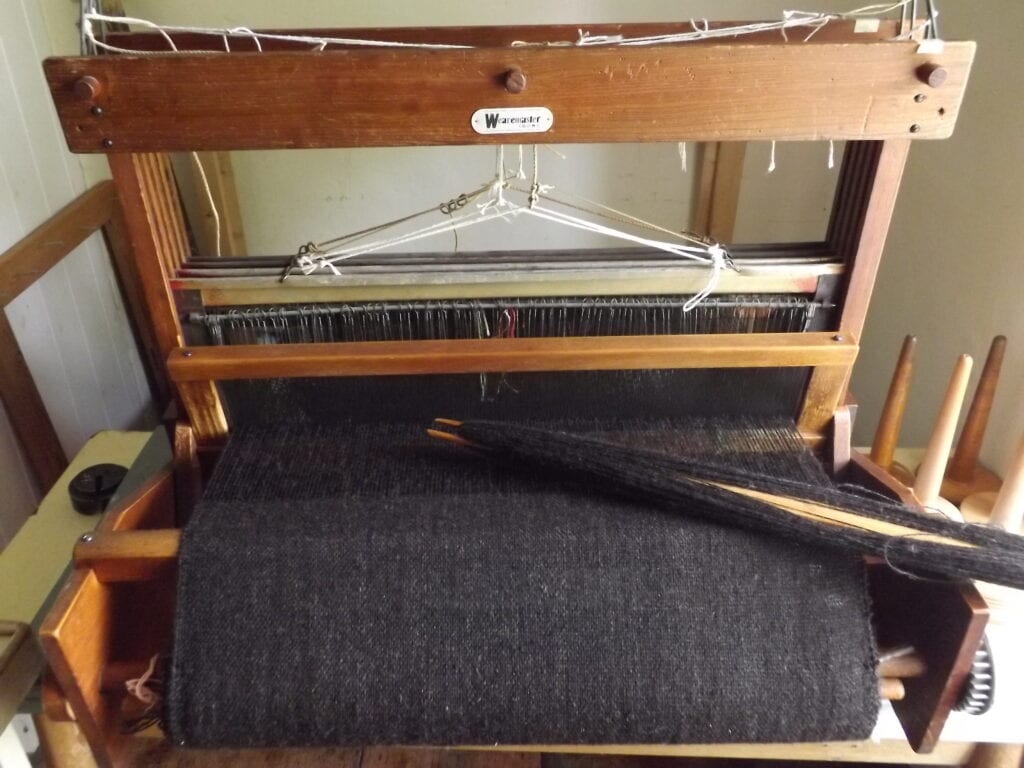 First of all there was the matter of winding and wrestling over 7m of warp onto the loom. This is a vintage Weavemaster table loom with a 14 dent reed 21″ wide. Using the maximum width is very satisfying but dressing the loom took an age and some swearing. 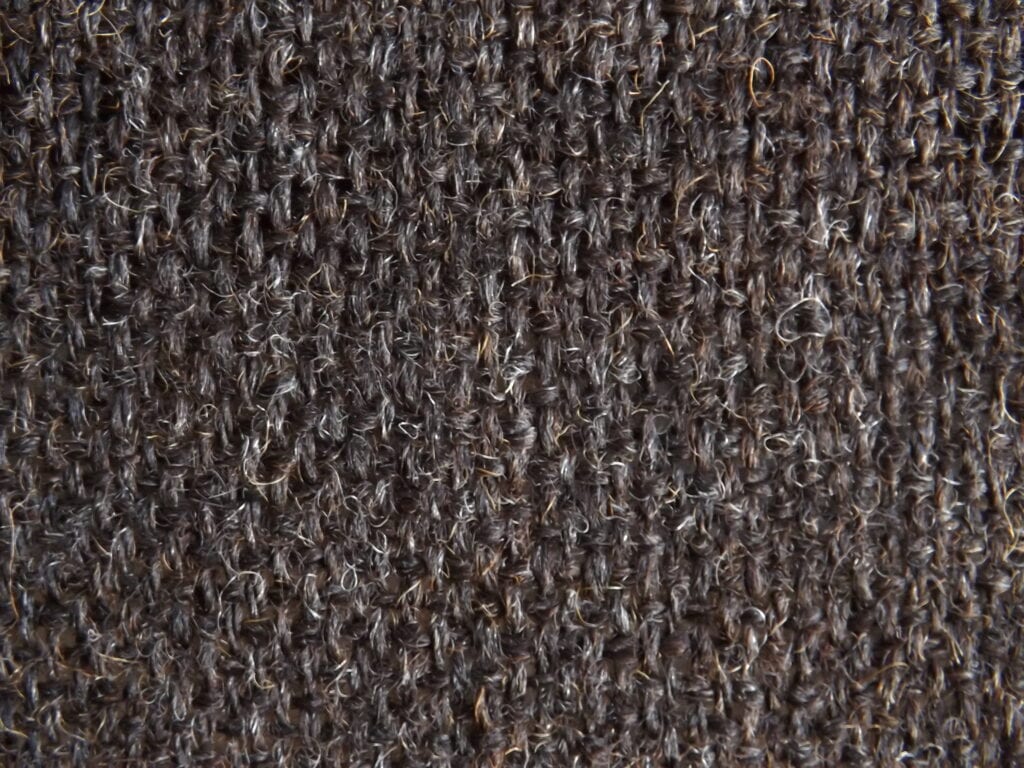 It’s a plain tabby weave. The idea was to go for plain peasant type cloth, nothing fancy. Not the most exciting weaving, but quick and straightforward once a few glitches in the warp tension were fixed.

Comparing spinning and weaving, the weaving process is very much quicker. In pre-industrial cloth production it required 8 to 16 spinners (sources vary) to supply one weaver with yarn. So the weaving took a matter of days rather than weeks to complete, working anything from a few minutes to a few hours each day. 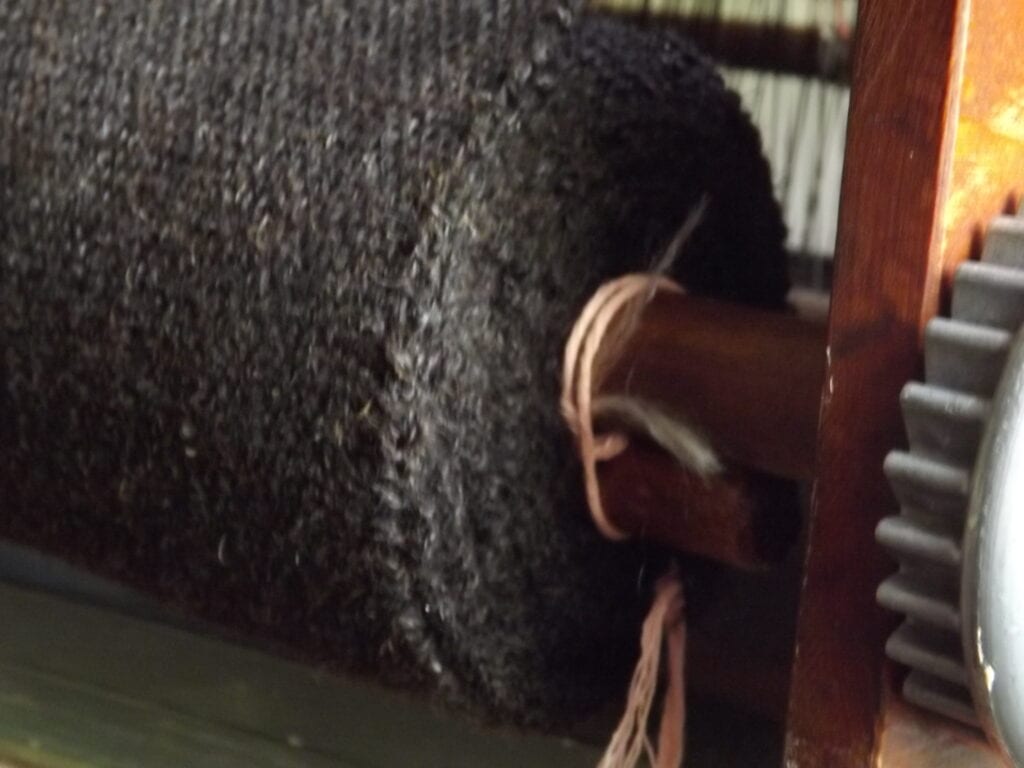 And a big fat roll on the cloth beam at the end was very pleasing indeed. 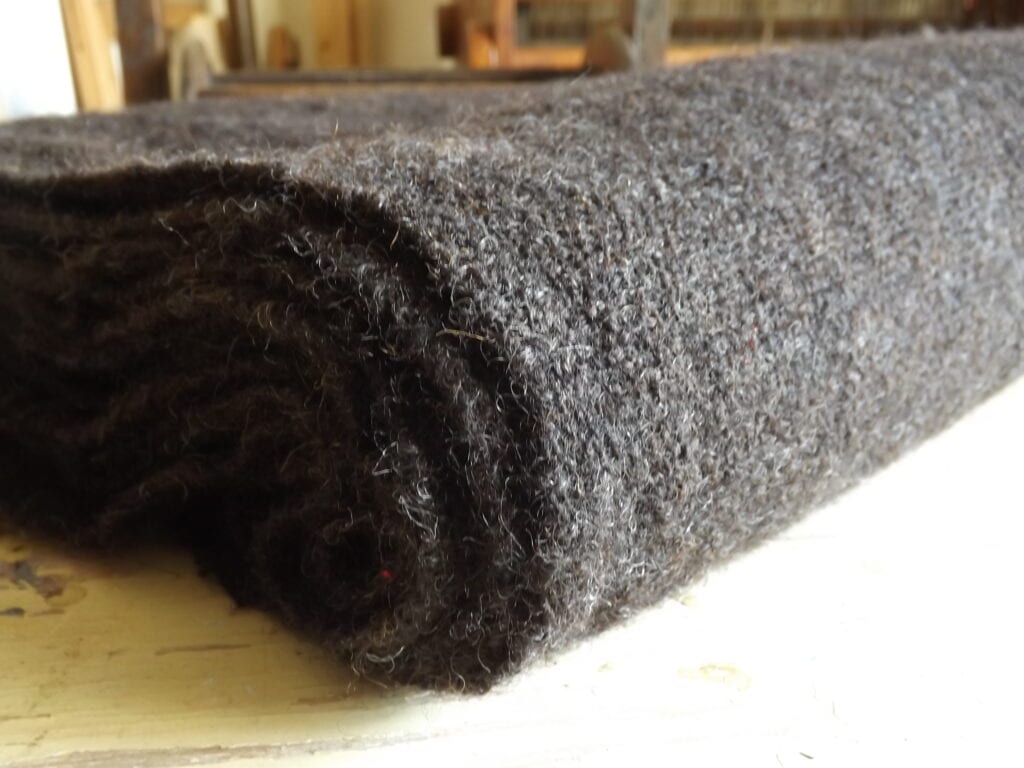 But the weaving was not the end. It needed wet finishing to create a usable fabric. This should shrink and felt the cloth to stabilize, strengthen, soften and create drape. It was important to get this right, and quite anxiety making. The Project could fail at this point, ruining many, many hours of work.

Basically the process involves harsh washing (to shrink) and bashing about (to felt). In the old days cloth off the loom would go to water powered Fulling Mills, which drew the cloth through great hammers to bash it about. Waulking tweed, was a similar process in Scotland done by groups of women, often with accompanying songs. There’s a lovely little clip here. 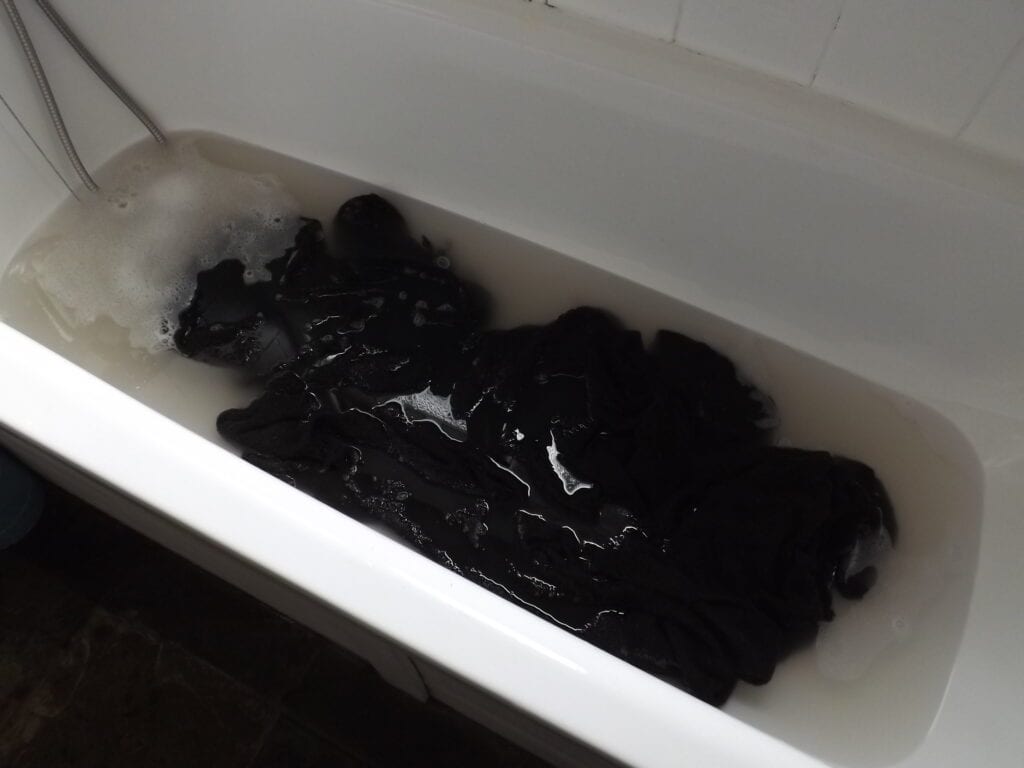 Not having either of these resources available. After soaking to loosen the fibres, the cloth went into a very hot bath for a good washing with lots of humping and bashing about, followed by a dunking in cold water. This was repeated a couple more times. But although the fabric softened nicely and the warp and weft had knitted together a little, it wasn’t enough and was still too loose and unstable. It wouldn’t be strong enough to hold up to any amount of wear.

It was time to use a bit of modern technology, the washing machine, the modern equivalent of the fulling mill,

But first some experiments. This involved cutting small pieces of the fabric from one end. 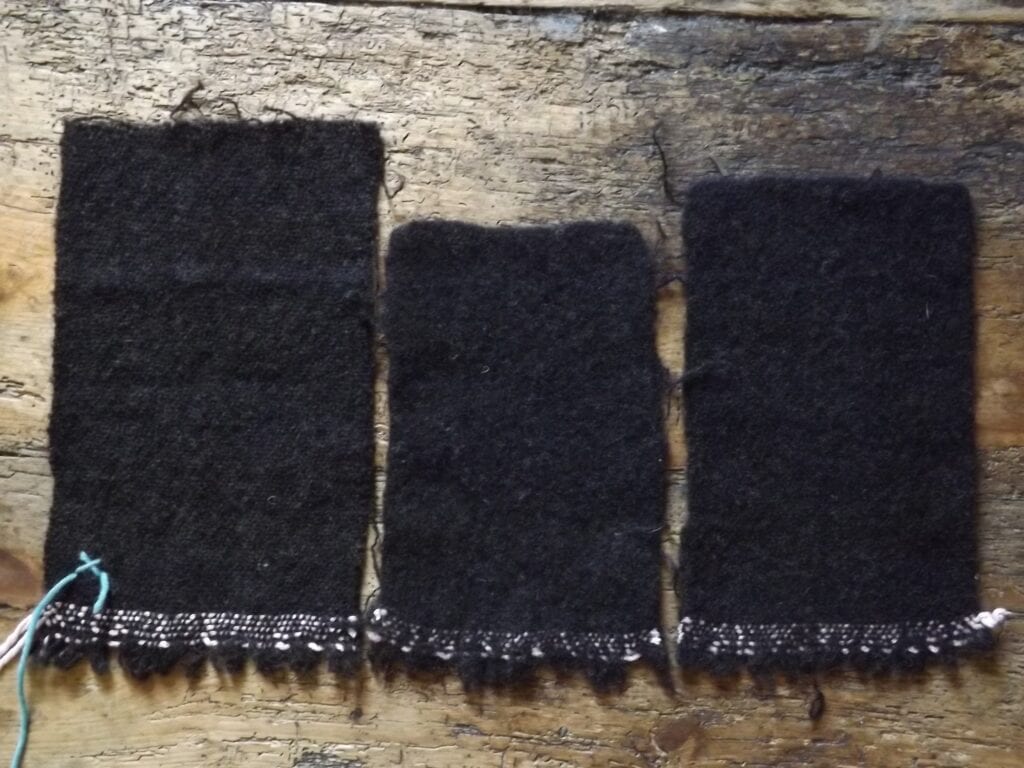 The first went through a 30 degree ‘wool’ wash – very little change from before.

The second went through a 60 degree ‘shirt’ wash – too much shrinkage and felting.

So the whole cloth went into the machine, with fingered crossed. 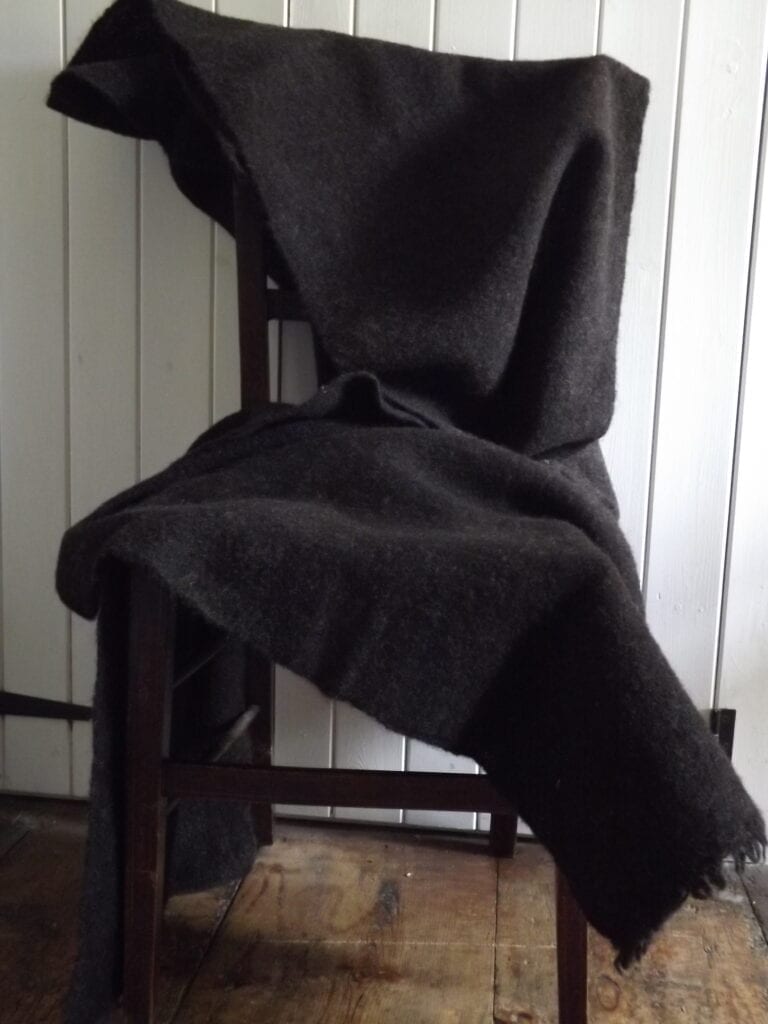 It did require a good amount of pulling and stretching whilst damp to even things out.