Tablet Weaving – Time to give it a Proper Go 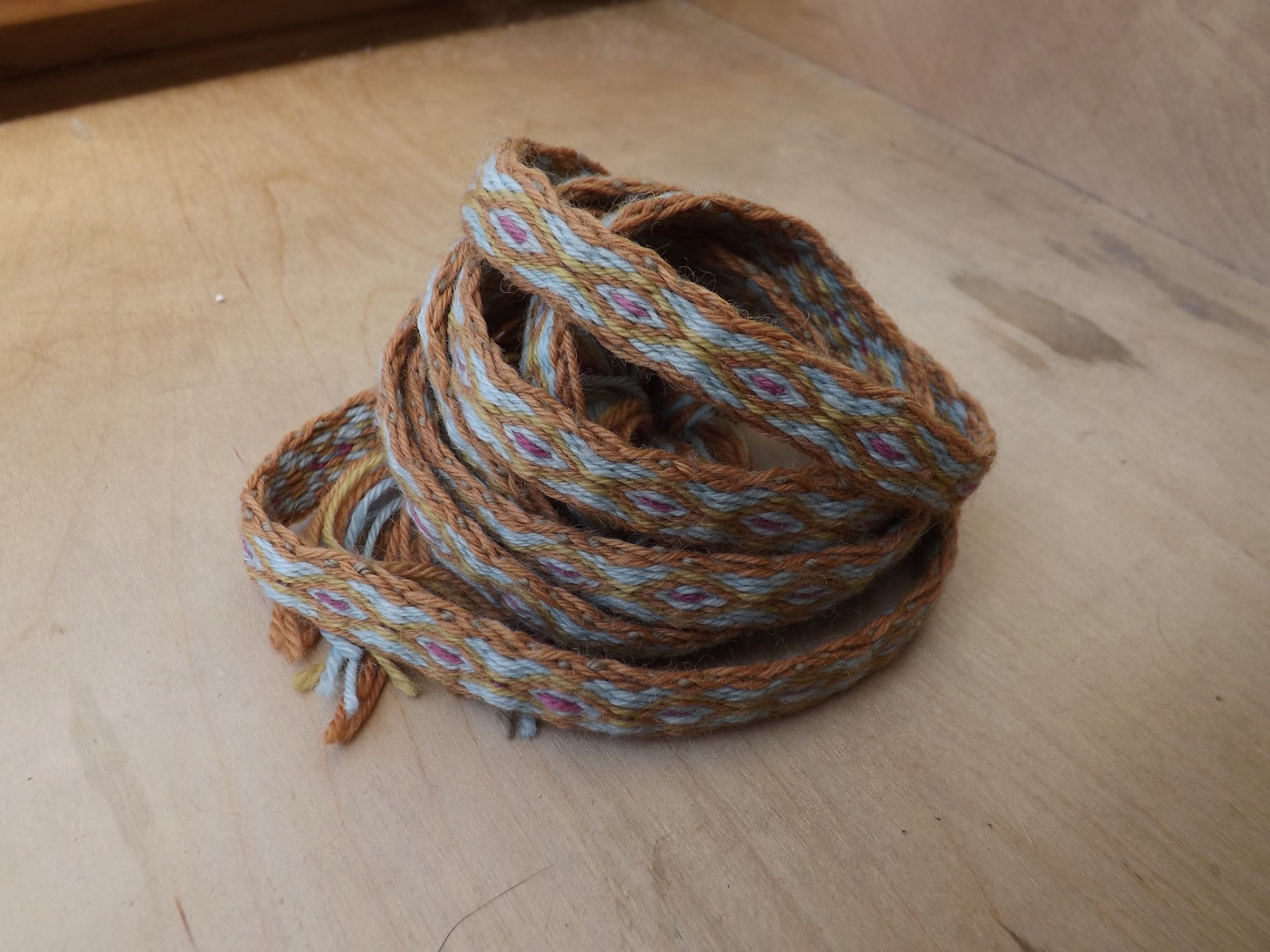 Tablet weaving is a technique for making braids and bands. It uses tablets or cards to create the shed through which the weft is passed. It dates back millennia and was much used by the Vikings to create trims around their overwise plain garments.

I have had a dabble before with mixed results. But now I had a particular project in mind so decided to give it a proper good go.

This is an ongoing (over 2 years) project, which will one day feature in its own post. And I need something to both decorate and strengthen the neck opening.

This method is both simple and complicated. Warp threads are passed through holes on each corner of each card in a set order and direction. The cards are then turned forward or backwards to change the shed and create the pattern. You don’t need any expensive equipment. You can make tablets out of playing cards. Although many people use an inkle loom you and use a backstrap method which doesn’t require a loom at all, just a fixed thing on which to tie the warp.

Now this post is not a tablet weaving tutorial, there are many good ones out there. Elewys on Youtube covers it thoroughly. Patterns range from relatively simple, using not to many cards, 2 or 3 colours and turning all the cards in the same direction at once, to complex patterns involving many cards, multiple colours and a complicated card turning shenanigans.

The tablets can be made out of all sorts of materials; wood, bone, leather in the past, cardboard, mdf or plastic today. Cardboard is the quickest and easiest option. I had some from those earlier trials cut out of old shoe boxes.

I had tried using regular DK yarn in the past which was too fluffy to hold up to running through the cards, this time I used leftover sock yarn which behaved very nicely. I also used a vintage box loom to hold the warp which made it portable. I found a (simple) pattern on the internet and set to it.

The process is fiddly to start with. It’s a little different to standard back and forth weaving. Tablet weaving is also a warp facing technique in which the weft should not be visible. This requires some practise. So does keeping track on where you are in the pattern, which involves turning the cards either forwards or backwards in the correct order.

After quite a few mistakes at the beginning things started to come more easily. Gradually you get into the rhythm of the process and it becomes less of a battle and more meditative. The way the pattern emerges from the turning of the cards is quite magical.

The cards only just held out and were decidedly ragged towards the end.

The result is far from perfect but very pleasing. A little over 130cm of braid, just over 1cm wide. And plenty good enough for the purpose.

Tips for next time:

Pay close attention to the tension on the warp before starting the weaving.

Also pay close attention to the tension on the weft at the beginning and throughout to keep things even and the pattern clear.

Apart from that, Crack On!