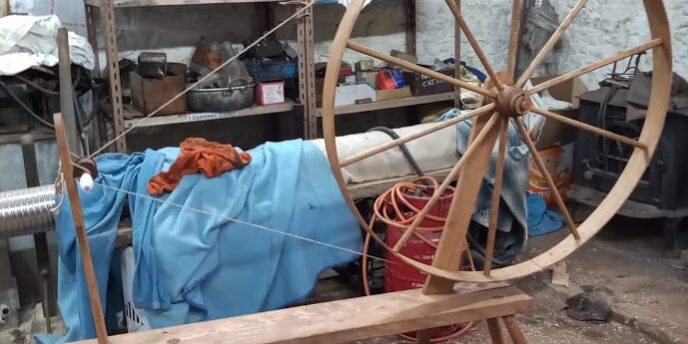 The Great Wheel, or Walking Wheel, was the first spinning wheel used in Europe. It is a spindle wheel, working on the same principles as wheels already known in the East for cotton spinning and adapted for wool spinning.

This lady, depicted in the Luttrell Psalter, is spinning on a great wheel whilst her friend on the right is carding the wool. The wheel stands taller than she is, and that’s no exaggeration. The idea is that the fibre (in her left hand) is drawn back from the spindle (on the far left) whilst her right hand turns the enormous drive wheel. She walks backwards as the twist is added, creating yarn, then walks forward to wind that yarn onto the spindle. It’s the same process as the spindle wheel in my little YouTube video. But it’s on an altogether bigger scale.

Although original examples do still exist, they’re not exactly ten a penny. They seem to be more common in America, where they are known as Walking Wheels. It seemed that a great wheel would be forever on the wish list.

But the wonders of Instagram turned up a maker. Well a wheelwright and wagon restorer actually. But a lovely man, Ben Headon, based in West Sussex, who had made a great wheel for someone else and was more than happy to make another.

And a few months later it was ready for collection from his workshop. 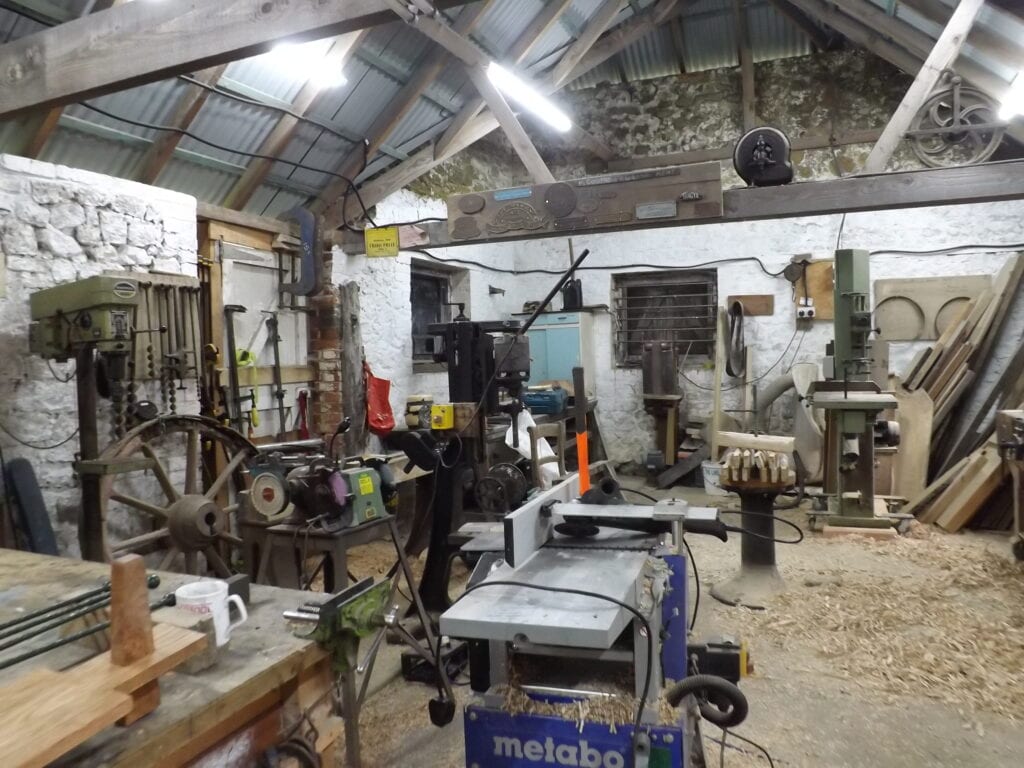 This is a man who likes his wheels. 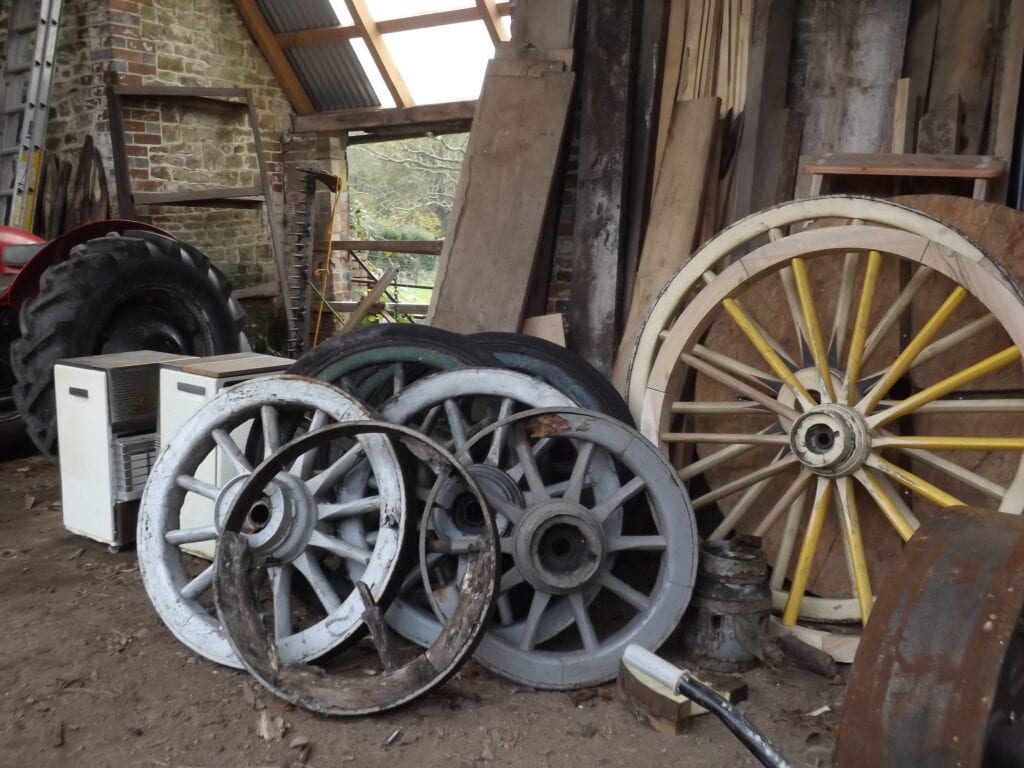 The base is made of oak. With alder spokes and ash rim. The spindle is turned yew wood. 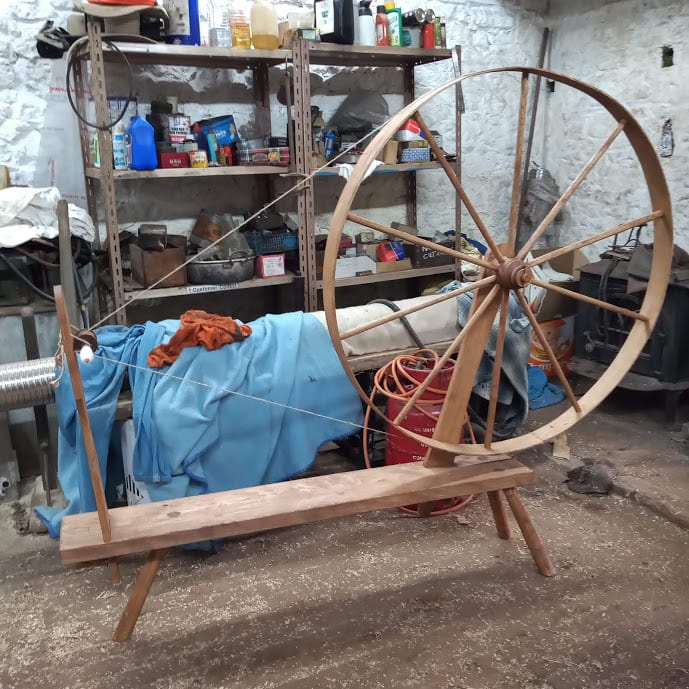 It stands five feet high. The dimensions were dictated by how it would fit in the car. It does dismantle, and the wheel itself just fits in. The workmanship is excellent, and Ben added a few lovely details.

It’s hard to appreciate the scale in the workshop. But once home and set up it’s easier to see as it stands in front of the piano. 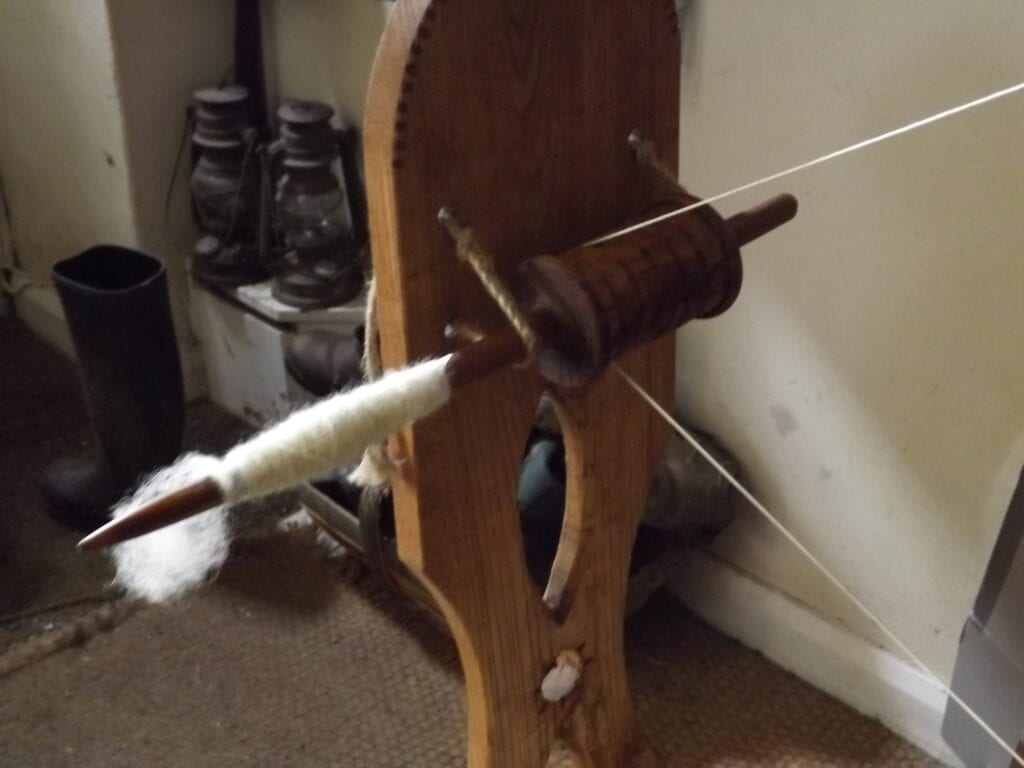 Here’s the spindle, hard to photograph on a dark winter day.

And, the most important thing, it works a treat. Which is just as well, as it will have to earn its keep, not only spinning wool but one day, hopefully, getting out and about for demonstrations.