Things to Make and Do 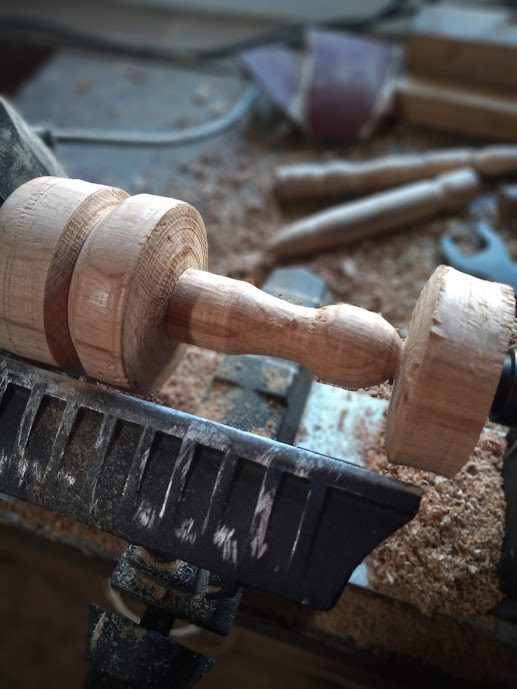 Woodturning has been a quiet itch waited to be scratched for a while now. Since before the move last year. It was one of the reasons for wanting a ‘proper’ workshop (with cottage attached). The main aim for this woodturning itch, as well as the challenge for its own sake, is to be able to make my spinning tools. Let the adventure begin.

This is the final stage of setting things up. The sockmaking/weaving side of the workshop ( henceforth to be called the Studio) is now well established, and the tool shed is also organised. So finally it’s time for the workshop itself.

Although a great deal of crap had been thrown out, there was still a pile of ‘stuff’, especially in that far corner. Some of this had come from the old place, destined for a boot fair before lockdown and the house move got in the way. Random stuff left by the previous owner and deamed worth selling was added to the pile.

A couple of trips out to Axminster boot fair, pricing to clear, got rid of almost all of it. A trip to the charity shop and the dump put paid to the remainder.

The coast was clear. The trestle table moved into the Studio, the workbench came in and even some task lighting rigged up. (Don’t worry about that old mangle, it has nothing to do with this story).

Time for the Toys

The boot fairs made enough cash to buy a lathe. It’s a Scheppach DM600, a basic beginners model. Lathes can get very expensive, but this should be enough to start. I also bought a bandsaw (also basic) for cutting up the blanks, which is what you call the bits of wood cut to size for your project.

The tools were a trade deal from the Vintage Tool Shop, who came last year and bought a load of old tools left by the previous owner.

There’s also an electric grinder, again left by the previous owner, to sharpen these tools. Turns out they need sharpening a lot. This is a skill I have yet to master, though I seem to manage some sort of edge.

The previous owner also left behind a load of wood. This is great. Buying blanks can get expensive, especially for practising. But I have TIMBER, lots of oak, mahogany and other stuff yet to be identified. Some pieces are better than others, but it’s there.

There are, of course, loads of tutorials out there on Youtube. I went through a lot. Many get bogged down in the kit rather than the technique. But The Welsh Woodman is very helpful.

As with any craft, there’s a whole new vocabulary to learn when it comes to the tools: roughing gouge, spindle gouges, parting tools, skew chisels. Best just to start playing.

Turns out that it’s not a terrifying as all that. My methods may not stand scrutiny by an expert. But it is possible to make something almost from the get go.

Here are some of my early attempts at making things:

Little trees are fun to make and a good way of practising using the tools.

This darning mushroom isn’t very refined, but it would do the job.

A hand distaff out of an old bit of pine pole. As a softwood pine isn’t the best for woodturnng. But this came out just fine, an is an upgrade on the recycled sink plunger handle I had been using.

This is a dealgan, an old type of whorl-less Scottish spindle. Not cheap to buy on Etsy. This is mahogany, which is a bit posh, and works a treat.

And finally we have a medieval style spindle. Not as slender as I would like. But it turns out that woodturning something very fine is tricky and nerve wracking. This was the fourth attempt, the first three snapped.

You can make things.